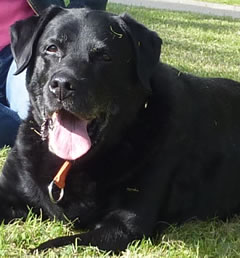 Jacob was my first Cinnamon Trust love. He was an ex-guide dog black Labrador with impeccable manners and a tendency to over-eat (of course). His obesity was the reason I was asked to help take him out for walks as his owner suffered from a debilitating condition and could no longer take him.

On one of our usual walks Jacob picked up something green, slimy and strangely shaped. Worried that he would eat it or choke on it I scrambled to remove it and he immediately went into play mode and dropped it to the floor with an expectant look on his face.

I saw it was a chewed up ball and gave it a little kick much to Jacob’s delight. I had never seen him play before and there were no toys in the house for him. He then picked it up and kept it in his mouth most of the time for the rest of our walk with a happy demeanour.

In just a few minutes I had learned that he loves to play with a ball and carry it around when we walk. I decided to produce a brand new ball for him to play with… Wow – what a reaction. Unfortunately within 5 seconds his teeth went straight through it and the ball was no more. 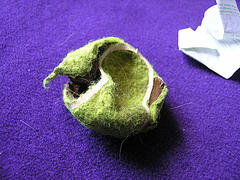 I normally wouldn’t recommend using tennis balls as toys for larger dogs as they can easily get swallowed and cause terrible injury or even death but with Jacob, he would simply chew the ball to bits without swallowing a single piece.

With some cooperation from his loving owner about watching his diet, Jacob went from a death-knell 49kg to a healthy 35kg and lived to a ripe old 15 years.