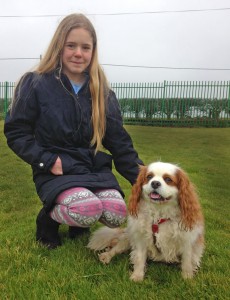 Jasper & Tia were inseparable. Two Blenheim Cavalier King Charles spaniels, who were the perfect partners-in-crime, made my walks both fun and frustrating. On walks, I had no coupler to help me unravel their leads as they twisted and turned, snuffling everything in their path. Fun loving, cheeky and demanding – they were a comical pair to watch. Both dogs would, however, go into a barking frenzy if they so much as clapped eyes on another dog, including on the TV!

Unfortunately, as is all too common with this breed, both dogs suffered with syringomyelia where Tia had the more pronounced symptoms. It’s caused by a malformation of the skull, which reduces the space for the brain. Symptoms typically appear between the ages of 6 months and 4 years. The first signs you might notice are sensitivity around the head, neck, or shoulders, with the dog sometimes whimpering, or frequently scratching at the area of his neck or shoulder, usually just on one side of the body, without actually making physical contact with the body (“air scratching”). They may try to scratch even when walking. For this reason, if your Cavalier is scratching, it’s important to take him to the vet to rule out SM.

When Tia died it left a gaping hole in Jasper’s life and it was plainly obvious to see that he was suffering some kind of grief, trauma or melancholy from the loss of his friend.

One of the ways this manifested itself was to lose the joy of going outside. Not only that, Jasper seemed to develop a fear of travelling anywhere that extended beyond the driveway.

Over time his weight increased due to lack of physical exercise. My formula for Jasper was to reward any interest in sniffing the area around the house and walking forward. His appetite was good and ate anything and everything so I had no problem giving him food rewards for walking with me but without the food he would often freeze and look longingly back to the house. I would try and use the food in fun ways playing pattern games and also using long lapses of time just to let him breath, stand and look around the street to help him cope. I also used a lot of BAT when encountering other dogs. I am not exaggerating when I say it took months to get him to cope with a normal 30 minute walk around the local vicinity and stay pretty calm in the face of other dogs.

Jasper began to enjoy a short walk or two everyday and especially if accompanied by his favourite person, Amy. This long process was hampered by his loss of vision in later years due to cornel ulcers and we basically had to start the whole process again from scratch but he absolutely recovered his joy of exploring the outdoors and lived a full and happy life