Sometimes talking it through with people on the other side of the world helps! This is from Wendy in Dubai writing to me about her two huskies who used to dangerously play fight, destroy furniture and show rather too much unhealthy interest in the cat. The young husky was a late-comer to the home, no toilet training, crate incarcerated as a puppy, attention seeking and harangued the older dog mercilessly…

We’ve been corresponding since April 2013 – I have included these comments to show the transformation over a year’s effort – a gradual process of how people can gain an understanding of their dogs needs to benefit the whole family. 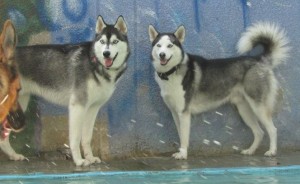 (June 2013)
You have helped us so much! I think we are in a much better position of controling them, I love the ‘ time out’! I think Ice is learning the most from this method. I have capped off one of the staircases, thats Legos safe place, he is small enough to get through the metal railings, the dogs are to big, his food and water are there too. But he is very rarely in that place, only to eat and drink, but he knows its there if he needs it! Lego wanders around the house freely, he feels quite confident doing it, but I always have Ice with me, or I am supervising. To be fair, 9 times out of 10 now, Ice dosent really bother with Lego…

I had, what I think was a fantastic break through about a week ago? Ice decided to just go mad, running around the living room etc, because we have been working hard on the ‘sit and stay’ command, that was the one I used. Shadow sat immediately! Ice still continued to go mad, so I focused on Shadow, what a good boy he was, etc. Ice stopped, looked at Shadow, and tried to tempt Shadow to start to run around again, Shadow looked him in the eye, then me in the eye, got up came next to my legs and sat beside me! Lol, Ice knew in a nano second that Shadow had chosen me!

Can I just say, we would not have gotten this far without your help! You have been invaluable! We all go to your printed out email for advice numerous times a day lol. Thank You SO much Jayne!

(October 2013)
We haven’t stopped the training and will still continue. Shadow is no bother, he walks well on the lead, is very happy on the home to just chill with us and Lego the cat etc. he barks when he wants some of our food off our plates, which we have never done. So he will learn! With them both, I can leave food on tables now, I can actually leave the room for some time, and it’s still there when I come back, which is fantastic! Ice still chews a little. He is still attention seeking, but I can tell he is feeling much more secure, so it’s only often, rather than all the time. He is so much more settled, and loves chilling with us all in the home, he is so loving. He is very good with Lego too now, he nudges him and kind of cleans him etc. They know the sit command, lie, leave, heal, stay etc. and for the most part do them when asked. That’s why I will never stop asking them to do these commands and others, they know we are the gentle kind bosses that love them, and the respect is definitely coming along nicely! Ice will walk nice on the lead if there is a treat in it lol. Once he has enough treats, he resorts back to pulling etc. but I have high hopes for him, and I know we have loads more work to do, but I have his attention now lol. Which is probably the biggest thing you taught me! I can not thank you enough! Xxxx

Just a quick message to let you know, our beautiful boys are doing so so well. We still have a few lessons to learn, but not huge ones. We are all settled back into routine since the summer, and life is very good! All 3, the cat and the dogs are happy and settled with each other, and us. Thanks you so much for all of your help, I am sure we couldn’t have done it without you. Xxxxxx

(June 2014)
The big fur babies and I are all well, thank you. And it is a big thanks to you! Shadow is just Shadow, laid back, until he wants a walk lol. Then we all know about it, he has an internal clock like no other, you could set your stop watch by him ha ha ha. Loves his walks! And we love him! Ice has calmed down so so much! It’s unbelievable how much he has changed, we adore him too! In the most, he has stopped destroying everything, tables, chairs shoes etc. he has his toys, lots and lots of Kong toys, and I have given him a routine when I leave the house.  I scatter his toys everywhere, all through the house, then just before I go to the door, I give him his kong toy with treats in. And we very, very rare come home to a trashed house now, yeey! Lol. Thanks again for all of your advice and help,